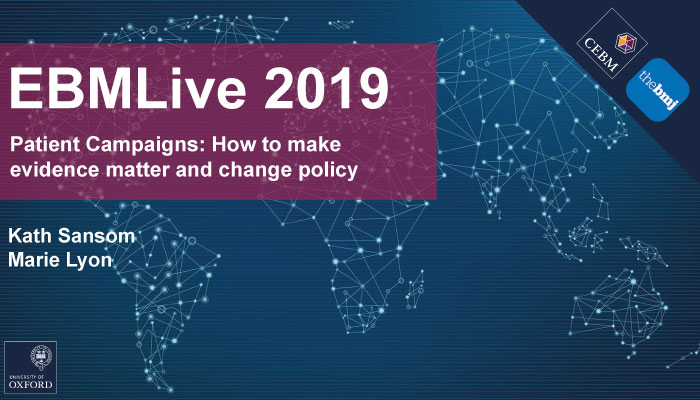 An announcement in the House of Commons following patient-led campaigns on the use of the hormone pregnancy test Primodos, anti-epileptic drug sodium valproate and surgical mesh led to The Independent Medicines and Medical Devices Safety Review Chaired by Baroness Julia Cumberlege

In this talk, we will hear from Kath Sansom and Marie Lyon and their experiences of running campaigns: what has worked, what hasn’t and how academics can help inform patient groups.

Transvaginal Mesh has been in the news for all the wrong reasons: hundreds of thousands of women have been harmed by the adverse effects of polypropylene mesh. As a consequence of a mesh operation that went badly wrong, Kath Sansom founded the Sling the Mesh campaign to raise awareness of the life-changing risks of a “simple” day case operation. With over 700 members this saw the creation of an All Parliamentary Party Group (APPG) that represents the view of a wide spectrum of women affected by mesh.

Hormone Pregnancy Tests were used in the 1960s and 70s and led to many women giving birth to children with congenital malformations. The story is not well known, but the consequences have been devastating for many affected families for over 50 years. Marie Lyon, as chair of the Association For Children Damaged by Hormone Pregnancy Tests, has fought to establish the truth. The campaign also led to the formation of an APPG to take forward the issues.