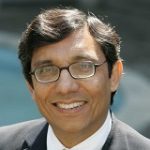 He also holds adjunct professorships at several leading Universities globally including the Schools of Public Health at Johns Hopkins (Baltimore), Tufts University (Boston), Boston University School of Public Health, University of Alberta as well as the London School of Hygiene & Tropical Medicine. He is a designated Distinguished National Professor of the Government of Pakistan and was the Founding Chair of the National Research Ethics Committee of the Government of Pakistan from 2003-2014. Dr. Bhutta was a member of the Independent Expert Review Group (iERG) appointed by the UN Secretary General for monitoring global progress in maternal and child health MDGs (2011-2015). He represented the global academic and research organizations on the Global Alliance for Vaccines and Immunizations (Gavi) Board and was the Co-Chair of the Global Countdown for 2015 Initiative from 2006-2016. Dr. Bhutta is the Co-Chair of the Maternal and Child Health oversight committee of the World Health Organization (WHO) Eastern Mediterranean Region (EMRO) and the Chairman of The Coalition of Centres in Global Child Health with its secretariat based at SickKids.

Dr. Bhutta studied at the University of Peshawar (MBBS) and obtained his PhD from the Karolinska Institute, Sweden. He is a fellow of the Royal College of Physicians (Edinburgh & London), the Royal College of Paediatrics and Child Health (London), American Academy of Pediatrics and the Pakistan Academy of Sciences. He heads a large research team in Pakistan working on issues of maternal, newborn and child survival and nutrition globally and regionally. Dr. Bhutta has served as a member of the Global Advisory Committee for Health Research for the World Health Organization, the Board of Child & Health and Nutrition Initiative of Global Forum for Health Research, and the steering committees of the International Zinc and Vitamin A Nutrition Consultative Groups. He was a founding board member of the Global Partnership for Maternal, Newborn and Child Health (PMNCH). He is a board member of the International Centre for Diarrheal Diseases Research. Dr. Bhutta was a member of the WHO Strategic Advisory Committee for Vaccines (SAGE) from 2010-15 and the Advisory Committee for Health Research of the WHO EMRO. He is the past-President of the Commonwealth Association of Paediatric Gastroenterology and Nutrition (CAPGAN) and the Federation of Asia-Oceania Perinatal Societies (FAOPS). As the President-elect of the International Pediatric Association (IPA 2016-2019), he is a leading voice for health professionals supporting integrated maternal, newborn and child health globally.