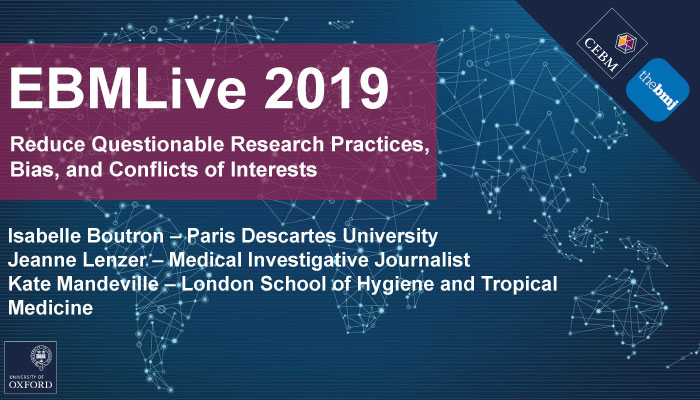 Jeanne Lenzer – The astonishing, maddening, and sometimes hopeful things I’ve learned from 17 years of reporting about bias in medical research – and a few counterintuitive things that might help the effort to produce sound science. The presentation will focus on legal (though often secretive) ways in which seemingly independent researchers and institutions betray good science and the public. I will share what Dr X, one of my deep-throat sources, taught me about harms reporting and the FDA, as well as the virtually unknown ways in which deaths of human test subjects are concealed as trade secret information.

Kate Mandeville – Conflicts of interest, but not as we know them: the next frontier for disclosure

Much progress has been made in identifying conflicts of interest in research and normalising their systematic disclosure. It is now time to turn our attention to other avenues through which undisclosed interests may have more influence. This presentation will examine two settings where disclosure is not yet the norm: the media and patient involvement. Disclosure in the scientific literature is often not reflected in media reporting, impeding the public from making the same judgements about bias as researchers. And frameworks to capture interests of policymaking committees rarely extend to patient organisations advising these committees, despite commercial funding being common among patient organisations. For stronger research and policy, it is important that researchers translate findings for the public and patients contribute to policy. Yet for the credibility of researchers and patients to be retained, it is crucial that we move the frontier of disclosure forward.