The Ecosystem of Evidence-Based Medicine: who is it and what does it do?

Three decades ago the production, dissemination and implementation of evidence was mainly done by, and targeted at, doctors. Regulation was lax, trials could be done at the flip of a coin and, of the few trials that were done, their results were mainly communicated by doctors to doctors, meaning patients had little, if any, say in their own treatment decisions.

Consequently, poor research prevailed. Many doctors undertook research they were not adequately trained for, all of which fueled a consultation approach, in which the doctor was the expert and the patient was merely there to comply. However, a growing move to a more patient-centered approach led to the recognition that there are many players who promote accurate, impartial uptake of evidence to empower effective patient decision making involving patients and their families or carers as well as healthcare practitioners.

The evidence-based medicine ecosystem can be defined as all those who contribute to the funding and undertaking of applied clinical research, its synthesis, publication and dissemination, and its implementation into practice.  Therefore, the ecosystem has many stakeholders: clinicians and healthcare professionals; researchers and funders; journal editors and writers; patients, carers and the public; politicians and policy makers; future leaders in evidence-based medicine; schools and academic institutions; regulators and registry owners; healthcare systems; guideline and cost-effectiveness agencies; pharmaceutical, diagnostic and device industries; and ethics committees.

However, within the ecosystem there is a growing realisation of the translational problems in the current production, communication and uptake of evidence. Some problems cross-cut many in the system: for example, the promotion of accurate, impartial uptake of evidence to empower effective patient decision making is probably something we all have responsibility for and want to fix. Some problems though may be more specific to one member of the ecosystem than another; it may be that better reporting of research is more of a problem for journal editors and researchers to fix.

Nevertheless, considerable effort has gone into facilitating effective coordinated action to improve the quality of evidence in a short period of time, emphasizing what the ecosystem has done, and continues to do.

The ecosystem has produced Evidence-Based Resources at the point of care. Systemically the Cochrane Library has produced up to date robust reviews; guideline organisations have increasingly set about using evidence in their guidelines, backed up by tools  (e.g., NICE, CKS) to maximise the uptake and use of evidence and guidelines, and tools such as Clinical Evidence provide decision-support for evidence-based practice.

For patients, collaborations, such as OMERACT have created core outcomes that matter to patients; the NHS actively promotes shared decision making and Choosing Wisely campaigns for better decision making and reductions in unnecessary testing and interventions for patients. Furthermore, NIHR research has been founded on the core principle that people affected by research have a right to have a say in what and how research is undertaken, and the NIHR has funded collaboration such as BEACONS to support, recognise, reward and build capacity for public engagement. In addition, INVOLVE has defined what is public involvement in research, and the NIH now requests public input on their projects. And to better inform the public Testing Treatments Interactive has been developed to help all of us think critically about treatment claims.

As an ecosystem we also like collaborating, meeting up and networking. Conferences include: Evidence Live, Cochrane Colloquiums, Preventing Overdiagnosis; Guideline Networks and Teachers and Developers.

In terms of the publication and reporting of research, there has been considerable activity. The Equator Network has provided tools for better reporting of health research; one of these tools, CONSORT,  has endorsed a  minimum set of recommendations for reporting randomized trials; AllTrials campaigns for all past and present clinical trials to be registered and their full methods and summary results to be reported, and the NIHR HTA Programme has deployed  mechanisms to ensure that all the results of research they fund are reported in full. Charities such as the BILL & MELINDA GATES foundation have also committed to an information sharing approach based on transparency and open data. Finally, the REWARD campaign has called for funders and research institutions to shift research regulations and rewards to align with better and more complete reporting

For policy, the EPPI-Centre commits to informing policy and professional practice with sound evidence. Sense about Science works to ensure that evidence is recognised in public discussions and policy making.

Integrated training pathways have also been developed to improve the skills of health researchers; CEBM provides high-quality training and education in the field of EBM; JAMA has published Users’ Guides to the Medical Literature, and the Student BMJ has promoted future leaders in EBM and many organisations like the AHRQ, now provide Education & Training for Health Professionals. The WHO, SIGN, and NICE amongst others ensure that recommendations are based on a comprehensive and objective assessment of the available evidence. To further these aims the GIN network has strengthened collaboration in guideline development and GRADE has provided an approach to grading the quality of evidence and strength of recommendations to improve how evidence is used and interpreted in the context of guideline recommendations.

When it comes to ensuring integrity in research the Research Integrity Concordat provides commitments that research is underpinned by the highest standards of rigour and integrity. The EPFIA/PhRMA has promoted principles for responsible sharing of clinical trial data and Medical Councils now provide guidance on conflicts of interest. The Physician Payments Sunshine Act has increased transparency of financial relationships between doctors and industry, and the UK Research Integrity Office and US Office of Research Integrity offer support to the public, researchers, and organisations to further good practice. Meanwhile, the World Medical Association Declaration of Helsinki continues to update the Ethical Principles for Medical Research Involving Human Subjects. And finally, Retraction Watch keeps us up to date with the latest retractions of scientific papers.

We have listed only a small amount of what is going on in the evidence-based ecosystem, but there is substantial networking and collaboration is already addressing the shortcomings in the way that evidence-based medicine operates today.

The Better Evidence for Better Healthcare Manifesto seeks to pull together a clear set of achievable goals, to understand who all the players are in achieving these goals, and to provide a strong overview of the strategies that work best, to help deliver change better, and faster going forward.

If there are interests, incentives or barriers that prevent the production or use of best evidence – we want to highlight them, so that they can be corrected. If there are solutions that have been proposed in the manifesto that seem relevant and practical – we want you to support them.

To create a healthier evidence ecosystem we would like to hear from you. 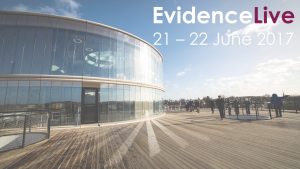 Please take a look at the highlights video from 2017 and listen to podcasts recorded during the event.

Informing and involving patients in decision making and co-design of research it is increasingly clear that decisions on how to use evidence in clinical practice must include and inform patients: